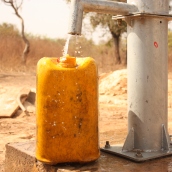 On occasion, I refer to myself as the “world’s worst missionary”.  What I really mean when I say this is that I am human and mess up like any other person. I struggle with people pleasing & jealousy, get mad and respond in my frustration, sometimes talk negatively about others, am selfish, don’t always want to help others and the list could go on.  On my most recent bush trip to drill wells, I found myself having one of these “world’s worst missionary” moments.

We had finished drilling the first well of the week and were making plans to return to a village about 20 minutes away to install the pump for a well that was drilled by a previous team.  Once that was done, we were going to head to the next village and set up to drill another well.  However, some leaders from a nearby village stopped in and asked if we would be able to come check out their well (that another organization drilled) because it was no longer working.  My response was one of frustration and irritation.  You see, everywhere we go (whether drilling wells, building hangars or something else) people come and ask for help.  And the truth is, sometimes it gets old and frustrating because it seems people always want something from you.  Thankfully, not everyone had the same response as me.  The FIA guys (our well drilling partners) agreed to go check things out and see what we could do.  So, after we installed the pump for the one village, we made our way to the village with the broken pump.

Before I go on, let me give you a little history about this area.  A couple weeks before, the FIA team had been in the village nearby where we had just installed the pump.  The Muslims there were not happy the team was there, were ridiculing the Christians and were not open to them using water from their pump to help with the drilling process. The team was there working on that well 5 days before they had success.  Fast forward a couple weeks and we were at a village down the road where God had given us an opportunity to show His love to this group of Muslims by repairing their well.   We were there for 2 or 3 hours while a crowd gathered and watched as the team worked to repair the well.  Some of us were able to pray for these people while the pump was being repaired and before we left we all gathered together and prayed that God would use this situation to reveal Himself to these people and open their eyes to the truth of His gospel.

It was dark by the time we finished and so we stayed in the village where we had just drilled the well for another night.  The next morning the same leaders came to thank the team for repairing their well and to see what it was going to cost them.  At this time some of the missionaries were able to explain that we did this for them because of the love of Jesus Christ.  They were able to speak words of truth that we are praying will lead to life change in that village.

Later that morning, we left for the next village and were able to complete 2 more wells this week and another 2 the following week.  So, even though God changed our original plans, He still helped us complete 5 good wells in 2 weeks.

After the incident with the broken pump, I had some reflecting to do in regards to the attitude of my heart.  It was not a good feeling to realize the pump wouldn’t be fixed and the truth of the gospel would not have been shared if I had been the one making the choice about whether to go check the pump out or not.

During this week, I was reminded of the verse in Galatians that says, “So then, as we have opportunity, let us do good to everyone, and especially to those who are of the household of faith.”  The reality is that we cannot help everyone in a country where we are surrounded by need everywhere we go, but this was a good reminder that often God brings people to us who have needs and I need to see these situations as opportunities to do good and not just as an interruption to our plans.